TJ Walton has lived and painted fulltime in Provincetown since 1989. She began painting at an early age in Newburyport, Massachusetts and credits her self reliance as being the creative force in her life. Walton has garnered a following and strong reputation for being at the forefront of a new movement of self-taught artists who prefer to learn by trial and error – self guided rather than be influenced by a “school of art.”.

“To some it is of no surprise that Walton is going in this direction.  Provincetown has played host and home to some of the most famous modernists in history, including Hans Hoffman, Pat and Nano de Groot and Motherwell, to name just a few.  Maybe their ghosts have found host in her abilities or perhaps she is simply ahead of the resurging zeitgeist of modernism”. .- Steve Lyons, Boston Spirit Mag.

Locally, TJ’s work can be found at the Jo Hay Studio, 153 Commercial Street. Additionally, TJ welcomes interested collectors, by appointment, at her studio, 508-737-6697 Find more of   TJ’s work by visiting her website at  wwwtjwaltongallery.com 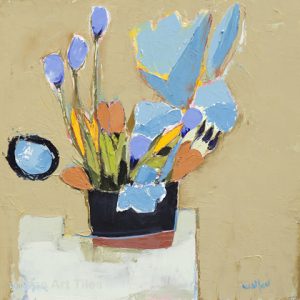